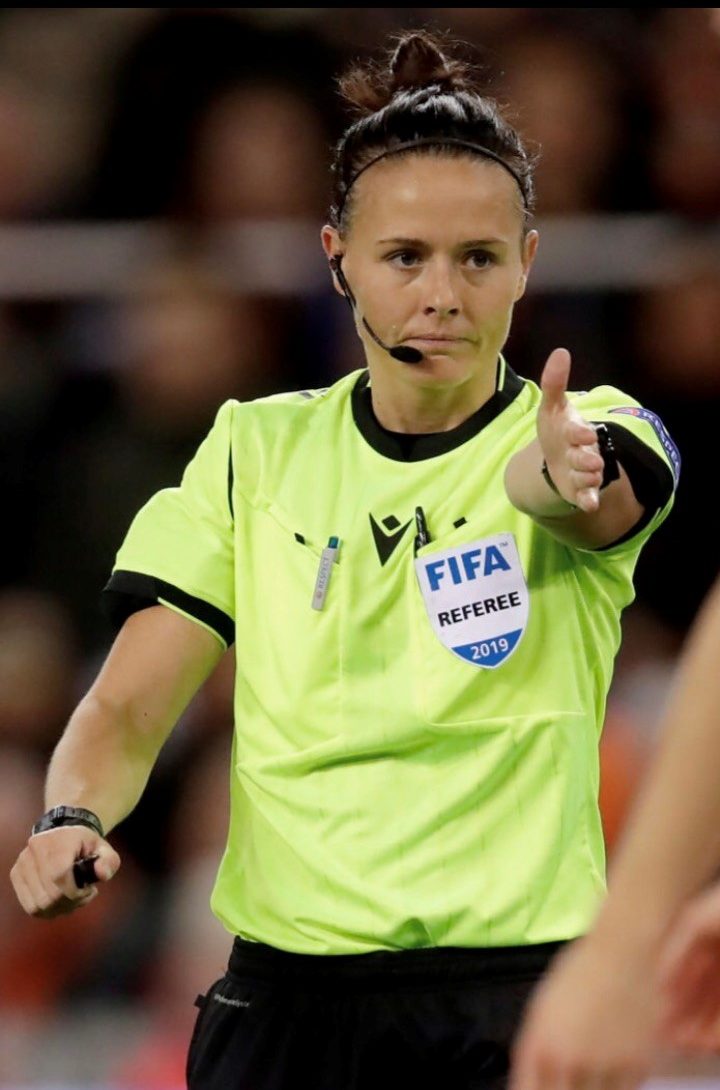 In French Beauty Expert we love celebrating the great success and magnificent personalities of Women in Business across many industries! Through our conversations with them we hope to learn more about what makes them powerful and keeps them growing personally and professionally and be inspired by their spirit.

Today we are speaking to Rebecca Welch, the first woman selected to referee a men’s match in the English Football League. It is the highest standard for a female referee achieved so far in the men’s game and great milestone that will hopefully open more doors for women referees.

How do you feel being first female referee to be appointed to take charge of an English Football League game?

It is a great feeling to be the first woman appointed to an EFL game. When I first decided to do the referees’ course back in 2010 I never thought I would be making history. Seeing how proud my family are really makes all the hard work worth it.

How did you get into the career path of refereeing?

I never had any ambition to be a referee, I played the game and always questioned referees’ decisions. My really good friend was a referee and she encouraged me to do the course, more so to educate myself on the laws of the game. Never did I think I would even referee one match let alone still being active 11 years down the line.

What do you think makes women excel in sports?

According to my own personal opinion and certainly the opinions of some other inspirational women I have worked with over the years, we as females excel because we always want to be better than average. I know I certainly put a little bit more pressure on myself to perform especially being involved in a male dominated sport. I am also very critical of my performances which helps me to learn, develop and improve.

Your biggest success in your career?

I approach this from two angles, I operate in both the men’s and women’s leagues so in the men’s it has to be the recent appointment to the EFL game. In the women’s, in 2017 I was appointed to referee the women’s FA cup final between Birmingham and Manchester City at Wembley stadium. It was played in front of over 30 thousand fans and it was a very-very proud moment to walk out at our national stadium as the team of officials on a cup final.

What are the biggest challenges you had to face in a male dominated world?

This is a really tough one as my experience in the male game has been very positive and I have a lot of allies in the men’s game who genuenly support me and want me to do well.

The biggest lesson in your career.

Most definitely that we are all human and we all mistakes.

What women have inspired you in your life and career?

First and foremost my mam, I always say that I was brought up on love and had the most amazing childhood. As a child growing up I always looked up to my parents and more so now I can see and appreciate what a great job they have done. Secondly would have to be my sister who every day, brings up her two young boys single-handedly and is an amazing mam to them.

Do you see more women getting into the refereeing world now than in the past?

Over the past three years we have seen a huge increase in females taking up the whistle and I think as the opportunities for women in football grow so will the uptake on female referees.

What do you hope the world of sports to be like for women in the future?

I would want sport to be a place for every single person who has a passion for any sport, with no barriers and access to all no matter, gender,age or race.

How do you envision your career to grow going forwards?

I always focus around the next game and take one step at a time. I would love to be promoted to the football league and go to a major European or world competition, but I try not to look to far ahead.

What does International Women’s Day mean to you?

I think it is a really positive occasion, however I would like to see people build people up every day of the year. I think we need to celebrate everyone’s success, both men’s and women’s. In a world where at times there can be a lot of negativity, we need to ensure we are positive about people around us every day.

Describe the 3 characteristics about yourself that you believe led to your professional success?

Good communication, as you can imagine this is vital part of the refereeing role and essential for every game. I also think I have good empathy towards the game – believe it or not Referees love football and I think it’s important that we have empathy towards how other people feel during a game. I also believe I am approachable, I’m always where I can explain the reason I have given something and also ensure I listen to players when they have a question.

How does your work positively impact women of your city and/or women of the world?

What’s a daily or weekly ritual you have that contributes to your ongoing success?

I have a strict physical fitness programme that I follow every day. I want to be as fit as I can and in order for that to happen I have to make sure I keep pushing my physical ability even on days when it may be difficult to do so.

What’s something interesting you’re currently working on? Personal or professional?

Lockdown has given me the opportunity to spend time on my garden, with the help of my dad!!!! So that is just about finished all ready for the summer coming!!

We use cookies on our website to give you the most relevant experience by remembering your preferences and repeat visits. By clicking “Accept All”, you consent to the use of ALL the cookies.
Privacy PolicyAccept All
Manage consent

This website uses cookies to improve your experience while you navigate through the website. Out of these, the cookies that are categorized as necessary are stored on your browser as they are essential for the working of basic functionalities of the website. We also use third-party cookies that help us analyze and understand how you use this website. These cookies will be stored in your browser only with your consent. You also have the option to opt-out of these cookies. But opting out of some of these cookies may affect your browsing experience.
Necessary Always Enabled
Necessary cookies are absolutely essential for the website to function properly. These cookies ensure basic functionalities and security features of the website, anonymously.
Functional
Functional cookies help to perform certain functionalities like sharing the content of the website on social media platforms, collect feedbacks, and other third-party features.
Performance
Performance cookies are used to understand and analyze the key performance indexes of the website which helps in delivering a better user experience for the visitors.
Analytics
Analytical cookies are used to understand how visitors interact with the website. These cookies help provide information on metrics the number of visitors, bounce rate, traffic source, etc.
Advertisement
Advertisement cookies are used to provide visitors with relevant ads and marketing campaigns. These cookies track visitors across websites and collect information to provide customized ads.
Others
Other uncategorized cookies are those that are being analyzed and have not been classified into a category as yet.
SAVE & ACCEPT